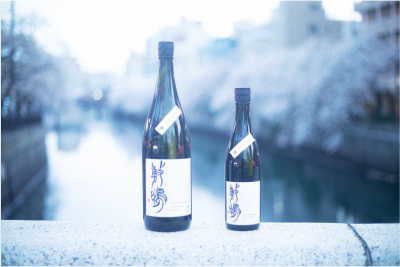 Ito, a sake brewery founded in 1788, closed its 212-year history 20 years ago. Masaru Ito, who quit his job as a salaried worker to train himself in sake brewing, finally succeeded in reviving the brewery. I worked with Kuniyo Tasaka, a female calligrapher who represented Japan at the Paris Japan Expo, to create the label for this important new product. I was in charge of branding, creative direction, art direction, copywriting, and design. First of all, I would like to introduce Mr. Ito’s story: “While working for a major telecommunications company, I quit my job and became a salaried worker. The story of Mr. Ito’s “desire to restore his family’s sake brewery, which was the origin of his own business, his training in sake brewing, and his revival of the traditional Shikishima brand in a new form” and the essence of sake, “Water is the key to sake,” combined to create the concept of “sake that connects the origin of sake. Based on this concept, we asked Mr. Tasaka to write a calligraphy that evokes the flow of the headwaters.

The name “Shikishima” is derived from the tanka poem “Shikishima no yamato gokoro wo hito to wa hito wa asahi ni hofu yamazakura hana (If I were asked what I mean by “great Japanese spirit,” I would answer that it is like the beauty of mountain cherry blossoms shining in the morning sun)” by Nobunaga Motoori. The family crest of cherry blossoms was also newly designed and used as a seal to accompany the calligraphy. The new Shikishima was named “Shikishima 0-step,” in keeping with the humble idea that the sake brewery’s recovery is the first real step forward.

Shikishima The first step will “weave the flow of time of the sake brewery that has been cut off and lead to the first step of a new sake brewery. We designed the label with the hope that it will convey the Japanese spirit of Yamato to our customers. The sake is now being sold at various sake breweries. The online store is still under preparation, but you can purchase it by sending a message to Mr. Ito.